Last night’s U.S. mid-term elections had a little bit for everyone. Perhaps the biggest winners were pollsters and political pundits who redeemed themselves by correctly predicting a divided Congress with a Democratic House and a Republican Senate.

Several of the races are still too close to call, but at the time of this writing Democrats appear to have gained at least 28 seats in the House which is enough to ensure them control of the House of Representatives. On the flipside, Republicans fared much better in the Senate (as widely expected) and appear to have expanded their majority from 51 seats to perhaps 54 seats.

A divided Congress likely means gridlock in Washington once again. This means that Republicans may face significant challenges on the legislative front (making Tax Reform 2.0 much more unlikely). However, there are some areas where bipartisan agreements could be made (like an infrastructure bill). It’s also possible that some agreements could be made on the foreign policy front as some Democrats appear to support President Trump’s tough stance on trade.

Importantly, we do not see this as having a large economic impact in the near-term as we see the repeal of the recently passed Tax Cuts and Jobs Act as an extremely low possibility and deregulation authority largely resides in the Executive Branch (which is under President Trump’s leadership). In the end, we believe that the more important drivers of the growth outlook will be whether or not the tax cuts are able to create a more sustainable economic path or start to fade in the back half of 2019. In addition to this, much depends upon how the Fed will respond to these conditions moving forward.

Importantly, gridlock in Washington is not necessarily a negative for equity markets. Since 1928, the U.S. has fallen under the leadership of a Republican President and divided Congress seven (now eight) times. During those periods, the average annual total return (which includes dividends) for the S&P 500 was 12.0%. We would also point out that since 1968, the S&P 500 has been higher twelve months after the mid-term elections every single time.

While we do not view the passing of the mid-term elections as a singular reason to buy, we do think that that the bull market has further room to run. Citi’s Chief U.S. Equity Strategist Tobias Levkovich is maintaining his 2019 year-end S&P 500 target of 3,100 – which represents about a 12% upside from today’s levels. However, we should note that late-cycle investing is often accompanied by more market volatility and subdued equity market gains.

An Update on the Coronavirus and the U.S. Primary Season 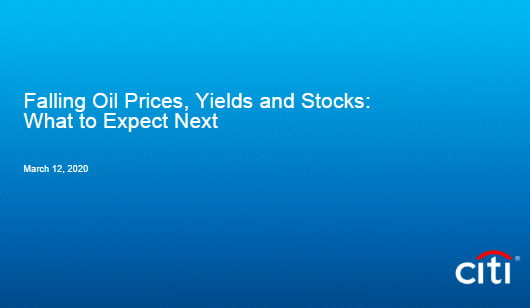 Falling Oil Prices, Yields & Stocks: What to Expect Next

INVESTMENT AND INSURANCE PRODUCTS: NOT FDIC INSURED • NOT A BANK DEPOSIT • NOT INSURED BY ANY FEDERAL GOVERNMENT AGENCY • NO BANK GUARANTEE • MAY LOSE VALUE